An Attempt to Trek in the Markha Valley, Ladakh and a Story Near Ganda-La, Ladakh
When we went to Ladakh this year in June 2005, our aim was to trek from Spitok to Hemis, which is also known as Markha Valley trek. After two days of taking rest in Leh, we started the trek. The first day itself, I developed a violently upset stomach. To tell you the truth, I guess the damage was done in New Delhi itself when I ate mushroom Momos in Connaught Place. But generally, I have a very strong stomach and I did not pay too much attention to the rumblings from New Delhi.

So on the first day of trek as we were camping in a place called Zinchen, I was paying many visits to answer the nature’s call. My husband was getting worried and he started asking me if we should head back? I wanted to continue. So, we walked for the second day, and I was walking like a zombie. Still, we reached Rumbak and camped there. My stomach was not too well even now. We decided that we would walk for one more day and see what happens after that. The above photograph is from the third day of walk. We started early in the morning from Rumbak to Ganda-La base. We must have walked for at least three to four hours (OK, we walk slowly, locals will cover the same distance in probably less than an hour) and then we discovered just this house, standing all alone in the wilderness. It is at least one hour’s walk from Rumbak (the place has no motorable road, though locals can use a pony) and on the other side, the nearest habitation is at least four to five hours walk away. Again, there is no other means of transport, apart from a pony. Can you imagine living in such a place? 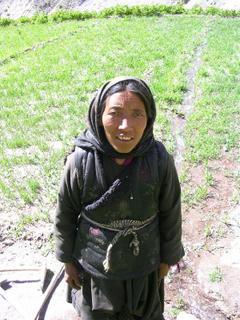 The lady in the picture was working in the field in front of the house. She very kindly posed for me twice and was quite delighted to see her snap on the LCD screen of my camera. Nearby, a much younger woman was washing a few vessels in a stream and a young kid was playing next to her. The tea stall for trekkers on this route was run by a couple of this house. In all, probably they are five people living together (or maybe more, I cannot be sure, but how big can the number be?) in this house, away from everything. I wonder how it would be like.
As, for our trekking the Markha Valley, we had to return from Ganda-La base, a little distance ahead from this house, as I just could not recover from my bad stomach. I was very disappointed but Ladakh is so beautiful and the other places that we visited, made up for the unfinished trek.

I started 'Travel Tales from India' my India Travel Blog in 2005 and it has become an anchor for my travel writing. My blog was once linked at BBC and The Guardian.
On the Way to Rohtang Pass: Traffic Jam Goa in December with a Difference