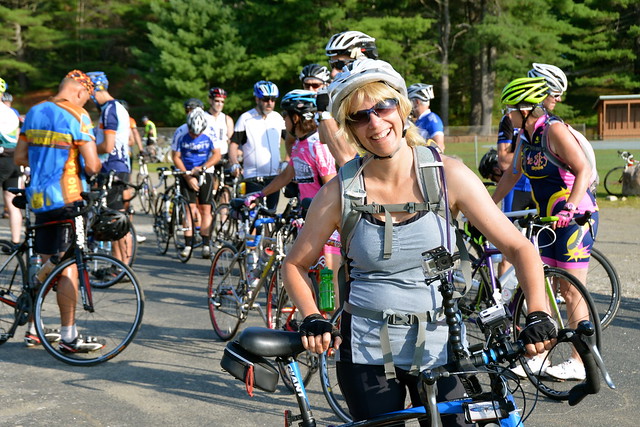 Conditions yesterday were absolutely perfect for a 75-mile bike tour through the Adirondacks called, quite aptly, ‘The Ididaride.’   The weather was beautiful and sunny, the roads were clean of debris, the relief tents were stocked with ripe bananas, peanut butter and salty potato chips and everyone’s spirits were high.

ADK Mountain Club Director Deborah Zack sounded the call of the start of the tour.    We shoved off at 8:30a with my GoPro camera rolling on the thunderous momentum of 475 bikers from all across the state, even the country, snapping their shoes to their pedals and waving goodbye. It would be roughly 6 hours and 40 minutes before I’d make it back again…. though at the time, I doubted the odds of being in one piece or even alive.

Biking Route 8, under a canopy of shade trees and rolling hills proved the only distance I really enjoyed.

The first break I picked at a few bananas, a handful of chips and a couple slices of watermelon.  I would do the same at all 5 stops, each for about five to 10 minute, but more and more with desperate vigor.

Route 30 heading north was a challenge.  The wide and roomy shoulders did little to comfort me from bands of ear-piercing Harley motorcycles flying by or the random truck camper getting uncomfortably close.   And, then there’s the elevation.  Good GOD – the elevation!  We’re talking 6,840 feet of climbing on a road bike.   At times, I was going so slow, weaving and bobbing, that I nearly fell over.

Oh sure – I could have walked my bike up certain stretches but have you ever tried clicking out of a bike pedal at four miles per hour?  It’s impossible.  My only option was to grin and bear it.

At the 33-mile rest stop, I stopped whining just long enough to meet 83-year old Walt McConnnell.   McConnell was getting his water bottle refilled and sporting a very rad Primal Wear frog bike jersey, something a young hipster from California would wear.   He was just the inspiration I needed.

“This is nothing. At 77 years, I rode across the country raising money for scholarships,” said McConnell, matter-0f-factly.   It was then and there that I started feeling optimistic again.

Why do the Ididaride at all?

Good question.  In my case, I do it only to check it off on a bucket list of things that I feel certain that I can never accomplish.   I don’t enjoy the pain and anxiety of facing my fears (I’m not a masochist)  but, rather, and I think many will say the same, it’s that sense of achievement, satisfaction, pride and fulfillment you get at the finish line that cancels out all the angst and agony. It’s a personal reward that lasts longer than anything else – longer than an arrival number or bragging rights among friends or the tasty beer and free buffet you get at the end of this ride.   It’s something I probably won’t do again because so many more challenges await on my bucket list, however it sure feels good when I can checked them off.

The only thing domestic about me is that I was born in this country. Now, lets TRAVEL!
The Trek to the Tiger’s Nest, Paro, Bhutan Pic(k) of the Week – Blue Pitchers and Bird Houses