Yet More Pictures from Ladakh

It has been such a long time I have travelled anywhere. The trip to Bangalore was not so much for tourism but for visiting family. We thought of going to Bharatpur Bird Santuary but we just could not go. Now H is in London but we plan to go someplace in Chamba (Himanchal Pradesh) in December. So when I feel travel sick and cannot travel, I revisit the photographs from my previous trips. And here are a few more from my trip to Ladakh in this June. 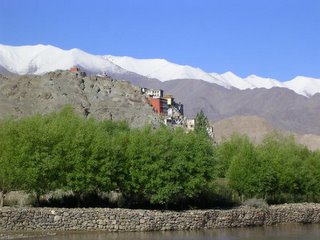 I took this photo from quite some distance and could not visit the monastry, but I like this shot as it contrasts some very green trees with bleak mountains.

The Manali-Leh Highway
The journey from Manali to Leh takes 18 hours and it is very tiring but the views are stunning. 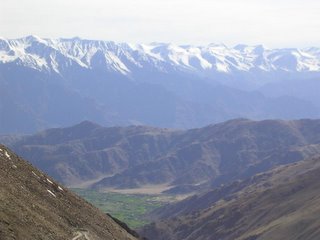 This one was taken on the way to the Pangong lake and this photograph does no justice to the actual scene.

I took a lot of pictures (that were lost in a hard disk crash) leaning out of the bus, because the driver was obviously not going to stop at every site we tourist found smashing. The above picture is one of them. 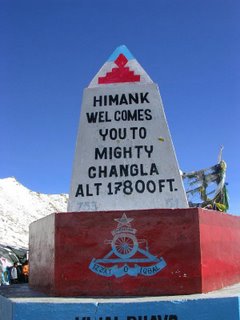 I have put this picture before on my blog but then no one said I could not put it again, right? In order to reach the Pangong lake we cross the Changla Pass at an altitude of 17800 feet. I could hardly breathe and our army folks are stationed there for months. We chatted with a few of them and one person who was just 18 , told that he found the posting difficult. Rest of them were stoic and joaked constantly with you.

I have put some other pictures too. If you wish have a look here and here

I started 'Travel Tales from India' my India Travel Blog in 2005 and it has become an anchor for my travel writing. My blog was once linked at BBC and The Guardian.
No Logo Anyone? Going Nomad in Ladakh